On the map you can see that the Costa del Sol runs (approximately) from Estepona in the west to Nerja (Maro) in the east, about 140 km, centered on the provincial capital Malaga. By car via the AP7 (toll road) and the A7 highway you can drive it in 1 hour and 40 minutes. Famous places west of Malaga are of course:

The coast to the east of Malaga (Axarquia) is less built-up and the main resorts are:

In recent years, huge investments have been made to connect the 14 coastal municipalities with each other for walkers and hikers. The integral coastal hiking trail of the Costa del Sol, Senda Litoral, is 184 kilometers long and connects 1.3 million residents plus 9.2 million tourists and winter visitors. (Click on the link for the map.) The route consists of a network of footpaths, boulevards, secondary roads and footbridges.

Some parts of the Costa de Sol, such as between Torrox and Nerja, are more difficult to connect due to the rocky coast and the lack of space and therefore parts of the Senda Litoral are still missing. Here is still looking for affordable solutions for the completion of the hiking trail. Currently about 95% of the route has been completed.

Hiking on the Costa del Sol is becoming increasingly popular due to the favorable climate. For this reason, more and more tourists book special hiking holidays, but these generally focus on hiking in the interior of Andalusia.

Andalusia is the largest autonomous state in Spain (see map below). Each province has a provincial capital of the same name. Spain is a strongly decentralized country and the regional government, the Junta de Andalucia, has a lot of power. 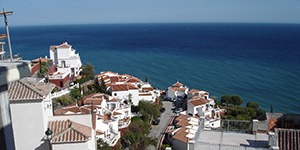